The growing season saw a glimpse of normality return for our Italian producers, following the intense heat and April frosts of last year.

The varying climatic conditions from the North to the Southern Islands kept the vintners on their toes. Rainfall and hail were particularly tricky to navigate this year, but overall our producers are very positive about the quality, and generally higher quantity, of the young wines.

Here’s what our producers had to say:

A wet but mild spring, followed by a warm and mostly dry summer, meant the grapes ripened significantly faster than usual at Alois Lageder. In early July, a hailstorm near Lake Caldaro slowed the ripening somewhat – but the above average temperatures during the rest of the summer led to an early harvest. “This year has been of great quality and quantity, resulting in exciting, fresh, lively and authentic wines once again,” says oenologist Jo Pfisterer.

However, it wasn’t an easy job in the vineyard. Georg Meissner explains: “This year has also shown us that we have reached our limit with certain grape varieties, working under such difficult climactic conditions.” He looks forward to the potential of their future wines, and what grape varieties are available for them to experiment with.

Bastianich was lucky to escape the hail from which other parts of Friuli suffered this year, and all-in-all had a very successful harvest. A rainy spring led to an early summer, which was warm but not excessively hot. Conditions around harvest were ideal; with warm, dry days and cool nights. Wayne Young says: “This led to an exceptionally clean, mature and abundant harvest of both whites and reds. Wines from 2018 will be mature and impeccably balanced, with reds of exceptional fullness and maturity.” 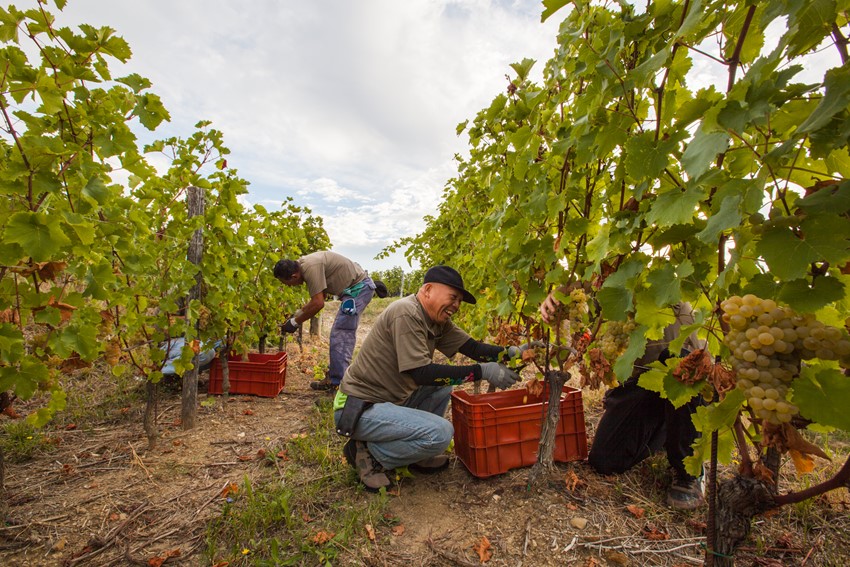 After last year’s drought, a mild, rainy winter was welcome to rebalance the soil’s water supply. Snowfall in spring delayed budburst, but a warm April put the growth cycle back on track. The crop was abundant, with an overall increase of 25% on last year. Early Autumn saw favourable conditions with a nice contrast between day and night temperatures, which improved ripeness and prevented the development of botrytis. Valentina Peroni says: “Grapes were healthy and reached a good aromatic balance. The quality of the wine of this vintage is to be considered excellent.”

A warm summer meant perfectly ripe and highly aromatic grapes for Bisol. Growth was abundant, which meant green harvesting was carried out in order to preserve quality. Andrea Briccarello, UK Brand Ambassador, says: “Overall we are extremely excited with the vintage that should show plenty of generous tropical notes and great freshness.”

A mild autumn was followed by a warm, rainy spring, which contributed to abundant flowering. A warm summer then sped up the growing process, with veraison taking place 10 days earlier than usual. Violent thunderstorms and hail in September luckily didn’t affect the vineyards, although there were major problems with flooding in the cellar. Fortunately, late September and October were characterised by beautiful sunny days that culminated in a successful harvest, with yields 10% above average.

“The 2018 vintage wines show light colour and intense aromas,” says winemaker Gabriele Dalcanale. “The alcohol is not too high, which means the fragrances are unimpeded and the wine will be approachable early. Good acid levels mean the wines will age well,” he added.

2018 was a good year for Suavia. A rainy spring with average temperatures was followed by a stable early summer. Grape growth was abundant, which called for green harvesting in order to preserve quality. July was dry, but August brought rain, which was good for achieving full ripeness. Therefore, the harvested grapes had a good balance of sugar and acidity. Alessandra Tessari, co-owner and head of marketing, expects “elegant and balanced wines, not very rich in body, but probably more floral and salty”.

Following 2017’s spring frosts, Morgassi trained their vines in a low cordon system, resulting in a smaller number of bunches per vines. The results are exciting this year, with extremely good concentration in the grapes. Two years of dryness placed huge pressure on the vines, so the rains were a relief, and summer was almost perfect bar two weeks of extreme heat in August. Cool night temperatures however ensured the grapes didn’t over-ripen, and Morgassi enjoyed an easy harvest with long sunny days. Co-owner Marina Piacitelli reports: “2018 has the correct alcohol degree, nice acidity and great concentration. We are looking at a very well-balanced vintage.”

Production on the Romagna Hills is still suffering from the effects of last year’s drought. For this reason, winemaker Celita Ravaioli says, “We tried to lighten the plants without loading them with too much fruit. This has led to lower yields, compared with a normal vintage, but excellent results in terms of quality.” The plains did not suffer last year due to irrigation and this year have achieved a 30% increase in yield.

“2018 is a particularly interesting year for white wines whose grapes, thanks to a mild summer, have remained fresh, rich in aromas and without damage from sun burn,” says Celita. “The fresh and fruity quality of the reds is well integrated, with a slightly less concentrated structure than 2017, but excellent drinkability.”

Harvest at both Castellare and Rocca di Frassinello has been very good. A rainy start to the summer was fortunately followed by a period of dryness and warmth into September. The resulting grapes have a fantastic colour and are very rich in polyphenols. “We expect the wines to be able to age for a long time and have a delicious elegance,” says general manager Alessandro Cellai.

Overall, 2018 has been a better harvest than the year before, but more complex along the way. Marotti are pleased with their quantities, especially following 2017’s small yields, and grape ripening was even across Le Marche through the summer. However, September brought a sudden change in weather. While other producers had their crops severely compromised, estate manager and owner Lorenzo Marotti Campi reports: “Thankfully, we have been spared by the hail, but the ripening process of the grapes has been slowed down, with cool nights and mild heat during the day.”

It’s early days, but Lorenzo believes that the whites, especially Verdicchio and the early harvest grapes, will be excellent, while 2018 looks to be good for the reds.

Steady yields and an increase in quality sums up a great year for Masseria Li Veli. The weather didn’t make things easy, however, with the beginning of the year bringing hail storms and lower temperatures, and late summer rains falling hard across the region.

Luckily for Li Veli, the hail didn’t hit the grapes and the rains kept some distance from the vineyards. Summer was warm, and the grapes matured well across their younger and older vines. After the unusually difficult conditions of 2016 and 2017, 2018 brought some normality back to the region. Overall, the resulting harvest has met their expectations and Li Veli are excited for this great vintage. 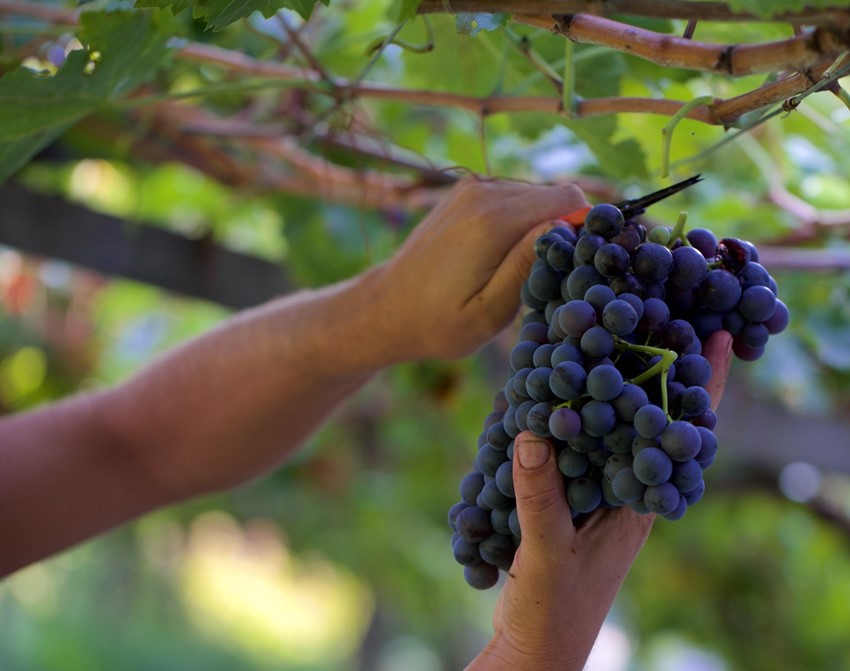 Unlike 2017, May 2018 brought welcomed rains that moderated the summer temperatures perfectly. Therefore, owner Francesco Scala is pleased to report higher yields and excellent quality grapes this year. “The 2018 Ciro Bianco promises to be very aromatic with citrus notes being especially pronounced. Because of the fantastic maturation we expect this to be a winner year for our reds as well,” he says.

Tornatore enjoyed constant temperatures throughout the spring and summer; mild and without excess, resulting in physiologically balanced grapes.

The whites were picked mid-September, with an optimal balance of alcohol and acidity. The even temperatures allowed the red grapes to continue maturing well into October, until midway through the month rain and humidity settled in. The last-minute rains added the typical freshness of Etna, and so Federica Campo describes 2018 as “a typical vintage of the Etna area: the wines obtained are consequently fresh, fine and elegant”.

A rainy spring and a milder start to summer saw temperatures dip below average for Fondo Antico. Plenty of foliage grew with the rain, important in the hot terrain of Western Sicily, but unusually this year was characterised by a slow maturation of the grapes. Harvest was delayed by 10 days compared to the norm.

Rainfall during the harvest period interrupted operations, and the vineyards were monitored closely in order to ensure the grapes remained healthy and balanced. With plenty of care, an excellent crop has been picked. Both the white and red grapes have good acidity and an interesting varietal aromatic profile. Gianluca Saladino, export manager, reports particularly good results from their red grapes: “They have reached a good degree of concentration, alcoholic content and a rather harmonious phenolic structure.”

2017 was dry and difficult for Spain, but how did our producers fair in 2018? Read the report to find out.