While challenging in some parts of Europe, the 2018 wines are expected to be brilliant. The heat of 2018 has impacted producers from Germany to Turkey in a number of ways. For most, the dry, warm year has resulted in larger, higher-quality yields than they’ve seen for several vintages. For a few, like Greece, the intense heat and drought has decreased yields and meant that 2018 had its fair share of obstacles.

Nonetheless, whether in larger or smaller quantities, the wines are expected to be good quality. Bibendum buyer Robert Mathias says:

"In general, 2018 will stand out as a very early vintage for producers across Europe. This was largely driven by some unusual drought and high temperatures of the summer period. In some places this produced wonderfully ripe wines with superb intensity while in other places, the drought became too extreme and reduced yields dramatically. With the 2018 vintage there are some amazing opportunities to be had where there is both quality and quantity."

Here's a roundup from our producers across Europe:

Wines of Germany have hailed 2018 as “one to go down in history as a truly outstanding vintage”. Following on from below-average crops in 2017, the warmth yielded 10.7 million hectolitres of grape must, the largest amount since 1999. That’s not to say it was a predictable year: “Drought and heat, as well as the fear of hailstorms and heavy rain, kept growers on tenterhooks,” they said.

“The 2018 vintage in one expression? Full of extremes!” says Katharina Okfen, marketing manager at Markus Molitor.

Starting in mid-September, this was their earliest, and longest, harvesting period ever. The dry summer lead the team at Markus Molitor to expect an average yield, but well-timed August rainfall helped to increase volumes significantly. As Katharina explains, “Even though it is not the typical character of a Mosel Riesling (concerning acidity and lightness), the young wines impress us with their concentrated minerality, richness in fruit and wonderful balance.”

Peth-Wetz began their harvest on 20 August and, according to owner and winemaker Christian Peth, “under near perfect conditions”.

Likening the grapes to those he harvested during his winemaking days in Australia, Christian praised the long drought from mid-June to October in allowing for a disease-free growing season and an opportunity for Peth-Wetz to introduce organic viticulture. While he had expected to sacrifice yields for the warmth, the water-retaining limestone soils in fact aided the opposite, and quantities were up on recent vintages.

The whites are showing their typical varietal characters, looking concentrated and full-bodied too, but it’s the reds that Christian’s really excited about. “Deeply coloured, concentrated and full bodied, we are sure that the resulting reds will match our idea of producing wines according to our motto: locally influenced, internationally inspired,” he concludes.

Again, harvest was early in Baden. Baden is somewhat more used to warmth than its fellow German wine regions, but still this year has exceeded the expectations of producer Weingut Kopp. Their old vines coped well with the intense dry spell, with only their younger Chardonnay and Pinot Noir vines needing extra attention. Harvest took place during the mornings and finished by noon, so as to not endanger the quality and health of the grapes. 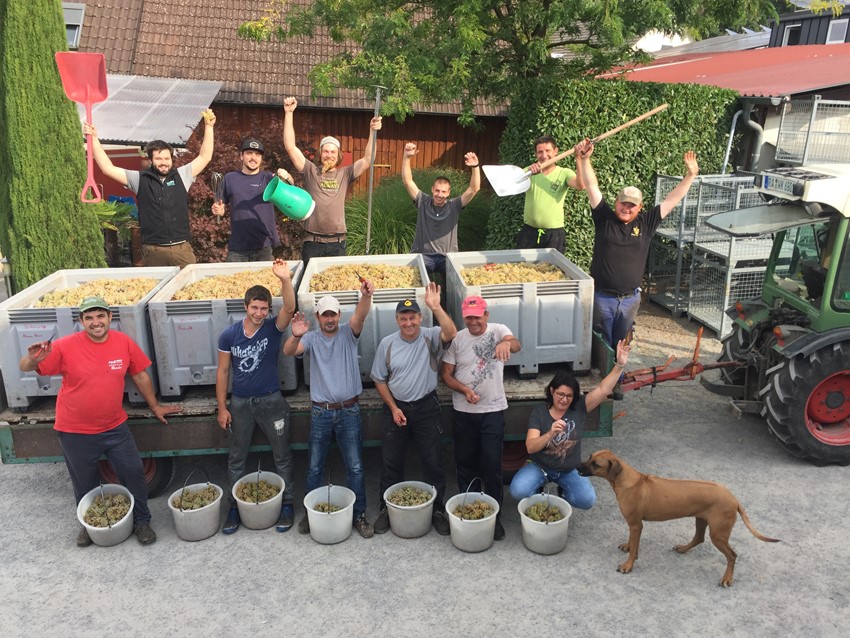 While yields are up on average, the intense heat and drought has left its mark in some of Austria’s regions, such as northern Weinviertel, reducing yields and placing their vines under severe stress. Despite this, overall the early and ripe harvest has seen volumes of around 2.6 million hectolitres and our Austrian producers are positive about 2018’s wines.

Owner of Weingut Glatzer, Walter Glatzer, reports of an early budding that saved the vines from the frost issues of 2016 and 2017. A dry, warm spring and summer without the usual threat of bad weather meant harvest could begin early, and the resulting wines are looking concentrated and exciting.

“The white wines are somewhat stronger than 2017, but with a lot of fruit charm, while the red wines are strong and intense, with ripe tannins and dark colour,” says Walter.

Josef Mantler, owner and winemaker at Mantlerhof, told us of the challenges this year brought. “We had climatic conditions that are quite uncommon and extreme,” he says, and extreme is just the word for it – 2018 was the hottest year in Austria’s (recorded) history.

While warm and at points difficult to navigate, Josef is very positive about the health of the berries. Acidity and ripeness are both good, and the little rainfall has allowed for botrytis in the Riesling vineyards. “Overall, the year will be seen as a good one, slightly more elegant than 2017 but still heavily impacted by the hot climate,” he concludes.

Harvest this year in Greece can be described as somewhat of a marathon. Intense drought pushed the vines to extremes and yields were down across the country, but while quantities may have lessened, our Greek producer speaks highly of the wines that they are beginning to make.

Earlier in the year, there were ambitious predictions of a high yielding vintage. However, the extreme lack of water meant the vines could not yield to 100% of their potential as hoped. Nikos Varvarigos, chief oenologist and head of production at Santo Wines, explains that despite the lower quantities, the berries are intense and concentrated. “Therefore, this year’s vintage should meet our expectations for high-quality wines,” he says.

Wines of Hungary cannot stress enough the quality of this harvest. “On all accounts, winemakers agree that the promise of this vintage will result in breath-taking wines,” they report. “The unusually warm weather in spring – which introduced early budding and flowering by 2-3 weeks – followed by the dry and warm summer without major weather extremes, resulted in an early harvest across all wine regions and above average yields of excellent quality,” they summarise.

Gal Tibor are delighted with this year’s harvest. Even, warm and dry weather throughout the whole season meant the grapes ripened fully, disease-free. Owner and winemaker Tibor Gal is particularly happy with how their Pinot Noirs and Hungarian varieties like Kekfrankos and Kadarka are turning out. “We believe this will be one of their best vintages ever,” he says.

The fermented wines so far are full of flavour – mineral, elegant and full-bodied. This year looks to be a vintage Gal Tibor hopes to repeat!

This year, Slovenia are on course to have the greatest vintage in their history. With 30% increase on the 10-year average, including a 45% increase on last year alone, this year’s bumper crop is set to be a big boost for their wine-producing industry.

2018 was the earliest harvest in 50 years for Puklavec. With large yields, this year was particularly good for the aromatic late-ripening varietals and is looking to produce complex wines with good structure. The vintage did not look promising to begin with, being too warm and wet for the grapes, but by the growing season it became drier and more moderate.

Tatjana Puklavec, of the Puklavec family, reports of a challenging time in Macedonia. Summer hail, followed by mildew, reduced the crops by 30%. Luckily, the remaining grapes were healthy and of high quality, so after careful selection, Tatjana is positive about the future wines. “We are expecting fruit-driven, aromatic, velvety and silky wines,” she says. 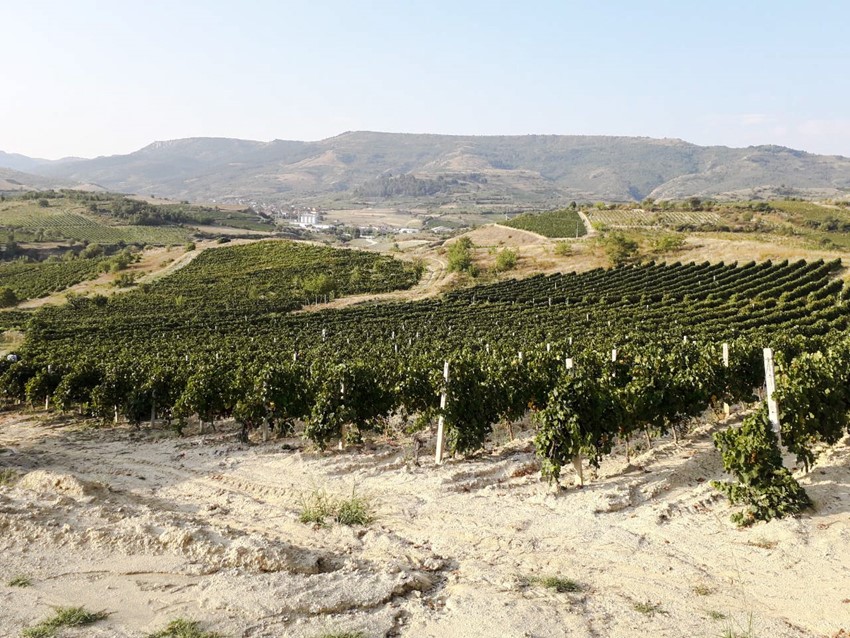 This year in Turkey was somewhat of a mixed bag. Some areas saw increased yields and complexity from the warmth, while others experienced heavy rainfall and a difficult growing season. Our Turkish producer, Doluca, experienced these extreme variances even within their own vineyards.

Across their Okuzgozu vineyard wines, Doluca are reporting a very good and interesting vintage. Although the spring was a touch too wet, the warm summer allowed the grapes to mature easily. “So far, there’s an intense nose from the small berries and a gentle and fruity palate with beautiful texture,” says Nicolas Brun, export sales manager at Doluca.

Unfortunately, heavy rains impacted their Bogazkere vineyards, reducing the yields there. Nicolas, while saying it may not be their best vintage, reports that the quality of the red grapes was not affected too much. “The first tastings have shown notes of blackberry and dark chocolate, with nice body and tannins,” he says.

The white wines are looking very positive, with higher-than-usual yields from the Tokat region and near perfect growing conditions. The resulting wines are currently complex and elegant, with notes of yellow flowers and apples.

Delve deeper into the 2018 European harvest in our French harvest report here.