There’s winemaking the easy way: in a temperate climate, on nice flat ground with lots of machinery and chemicals to help. And then there’s the hard way…

A world away from the cosy restaurant or hip bar where that bottle of complex, elegant and deliciously moreish wine is poured, there’s a group of reckless individuals battling the elements in the pursuit of creating something great.

They might be working at the very limits of where it’s climatically possible to grow grapes, scrabbling on hands and knees to tend vines on vertigo-inducing slopes, or harnessing the power of Mother Nature to battle vineyard pests. But one thing they all have in common, is the desire to make truly remarkable wine, regardless of how physically, mentally (and financially) draining that might be.

So let’s spare a thought for those mavericks out there hand-ploughing steep, stony vineyards or protecting their vines (and themselves!) from frostbite. Meet the Extreme Winemakers... 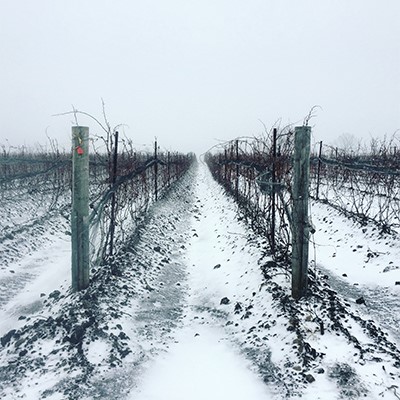 Below 10°C is too cold for a vine’s cells to function. That’s why vines lie dormant in winter throughout most of the winegrowing world, before waking up again, refreshed, in spring. But if the temperature falls to under -20°C? It’s bad news.

Norman Hardie from Canada’s Niagara Peninsula explains, “with temperatures below -19°C to -21°C on vinifera, the primary bud will die; underneath the primary is a secondary bud that will die between -21°C and -23°C, while the tertiary bud that sits below the secondary will die between -24°C and -25°C. If that happens, there will be no green tissue the following year and the whole plant will perish."

Ningxia province in China, while warm and sunny in summer, can regularly plummet to -25°C in the winter. Lenz Moser from Chateau Changyu Moser XV tells us how they avert disaster: “We tackle the danger by burying the vines. This is a very labour-intensive process, which involves pruning the vines right after harvest. Then the vineyard is watered for solid moisture and freezing potential. After this, in early November, the vines are buried with soil, simply by holding the vines down manually and then ploughing in around 30cm of soil needed for full protection.”

Norman uses a similar technique to protect his vines in Niagara, but feels the extra labour is worth it. “I would rather do this extra work in those incredible soils than work less, and less expensively, in an easy, warm climate with sandy soils. The best wines have always been made on the edge, it's a combination of terroir and climate. I would rather be on the edge for climate and have the best terroir than the opposite.” 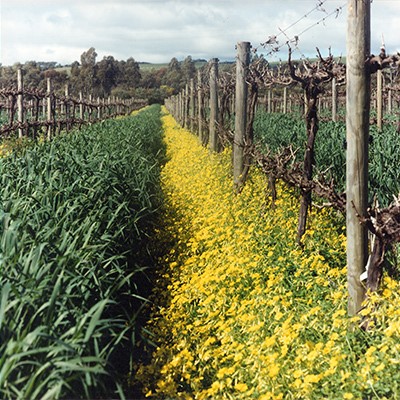 The power of Mother Nature

Sustainability’ is bandied about rather a lot these days, but some winemakers are taking it to the next level by harnessing the power of nature to help fight vineyard irritations and even replace the need for electricity.

Joch describes how soursobs “have the reverse lifecycle of the grapevine, growing rapidly after winter’s opening rains then dying off in spring/ summer as the vine exits dormancy. They outcompete other weeds and are the only weed control you need!” Considered a weed in itself throughout the rest of South Australia (and hated by gardeners), it takes a lot of work moving the bulbs around to get them established, but once they are in, this humble little flower does the work of gallons of herbicide. 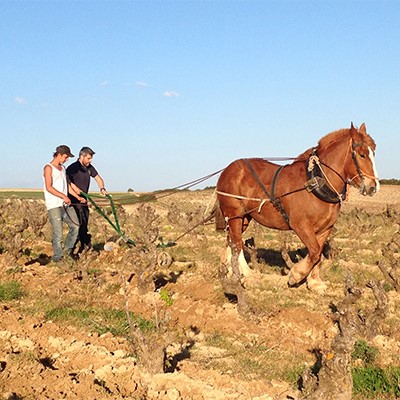 It’s like the Industrial Revolution never happened in some parts of the winemaking world. But is it worth forgoing the ease and practicality of machinery to embrace a more traditional way of working?
Bodegas Bhilar horse cart

David Sampedro from Bodegas Bhilar in Rioja follows a biodynamic approach to farming, so returning to the use of horses in the vineyard seemed like a natural step.

It might be a lot slower to work the vineyard by horse, but as David explains, “horses have helped us better understand our vines, as you walk each and every line in the vineyard. You are able to see the health of the vines, the soils, the ecosystem, whereas riding inside a tractor, you can't even see the grapes and often don’t even have to set foot in the vineyard. The use of horses forces us to be more thoughtful.”