The Southern Hemisphere's 2020 harvest has begun! As our producers begin picking and sorting, we bring you all the latest news from the other side of the globe, straight from the vineyards.

It's Chateau Tanunda's 130th anniversary this year, so the welcoming of the 2020 harvest has caused more than one reason for celebration! The team look ready to get started, bringing in the first of the Semillon grapes. 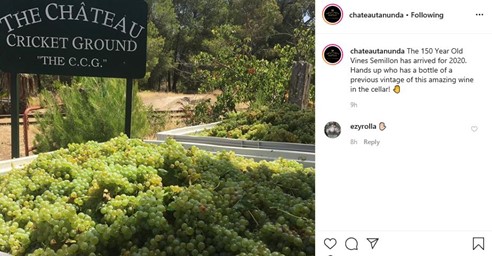 It may be another 4-6 weeks before harvest mania truly takes off in the Yarra Valley, but the grapes are starting to look good! Darren Rathbone, owner and winemaker, will be checking in on the Pinot Noir regularly. We think it's looking great so far. 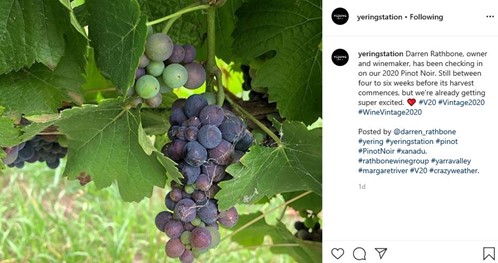 Harvest kicked off a week and a half earlier than expected, according to winemaker Mike Dawson. Sauvignon Blanc, Semillon and Chardonnay grapes have been picked and fermented, and all are looking clean, aromatic and complex - perfection!

Creation have launched their 2020 harvest, and released a video of the various processes that will take over the winery for the next couple of weeks. Watch the full version here. 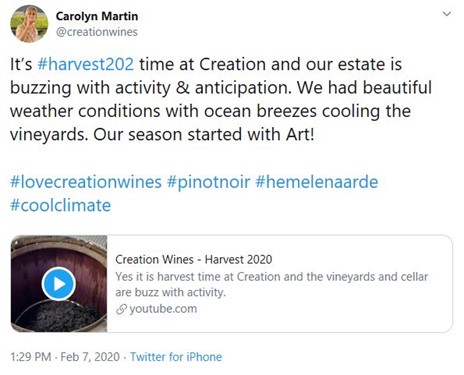 And just like that, Harvest 2020 is done and dusted over at Graham Beck! There'll be months of work still to come before the wines hit our shores, but for now, the team report that the Chardonnay and Pinot Noir are 'exceptional as ever, with textbook results'. Congratulations to the Graham Beck team! 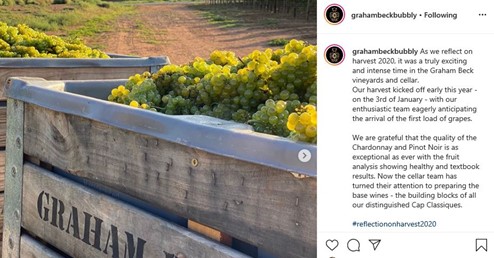 More from De Trafford over in Stellenbosch, and they've moved onto the harvesting of their red grapes - it's all going quickly! Their team are sorting through Merlot today, all ready for the next vintage. 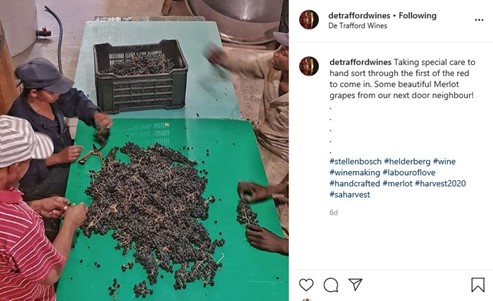 A harvest team shot marks the first mention of the 2020 vintage at Stellenrust! The team look ready to go - and they're praying for good wines and health this year.

Marking our first Australian producer to officially get started, Fraser Gallop head out to their fields to start with their Chardonnay grapes, ready for the next vintage of Parterre. We can't wait to try it! 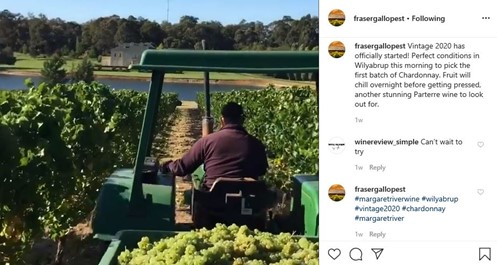 More Argentinian producers are launching the 2020 harvest this week, with Bodega Vistalba adding their first contribution - the first truckload of grapes. 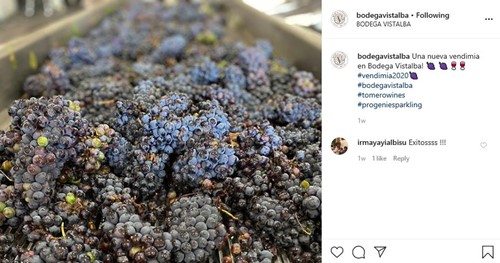 'Harvest is around the corner!' say La Posta, with a picture of some mighty delicious-looking grapes. Fingers crossed they taste as good as they look! 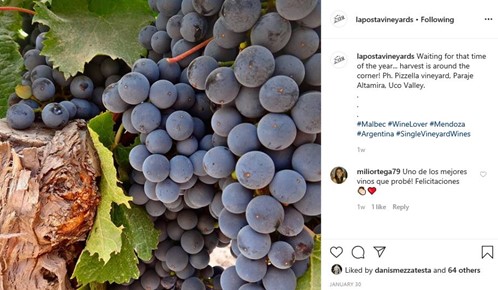 Another South African producer joins the fray, as De Trafford start off 2020 by harvesting their Chenin. Straw wine = incoming!

Preparations for harvest look like they're underway in the McLaren Vale! Battle of Bosworth have dug out their technology for a quick spruce-up, ahead of the madness to come... 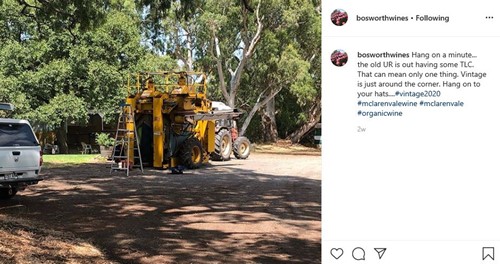 It looks like South Africa's starting early across the board this year, as Spier kick things off over in Stellenbosch. They've got high expectations for this year's harvest, in line with their success over the past few years. 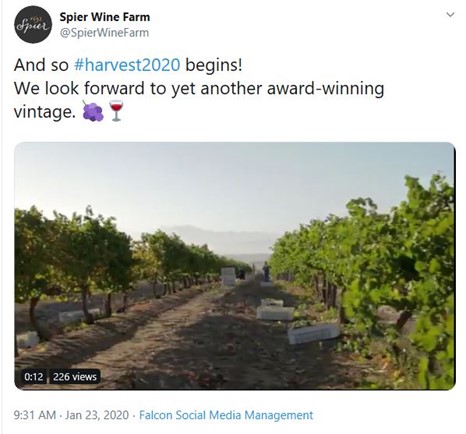 More updates from Robertson: Springfield Estate have showcased their groundbreaking method of harvesting this year - using dry ice. They've employed this method to limit oxygen exposure as much as possible, preserving the classic Springfield-ian aromas, freshness and flavours. Fascinating stuff! 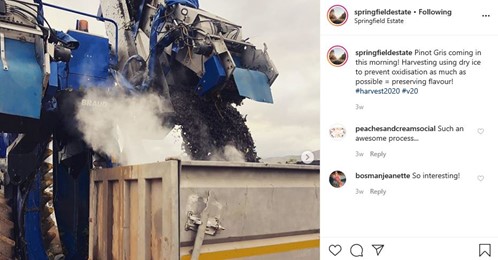 'It feels surreal', say Springfield Estate, whose 2020 harvest has started a full ten days before expected. Due to scorching temperatures being predicted for the coming week, they'll be harvesting between 2am and 8am daily - and are expecting 'to be playing catch-up sooner rather than later' in terms of picking, due to the heat. 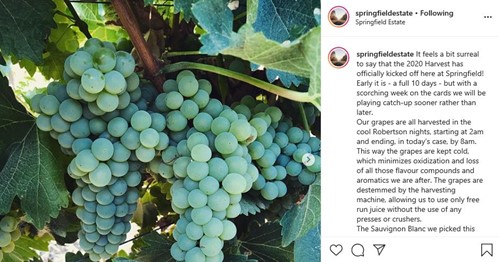 Brazil has joined the harvest! Miolo are kicking things off in the second week of the new year. 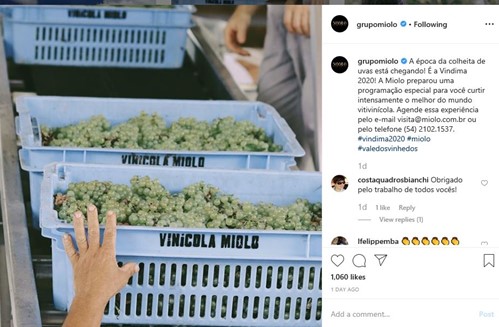 Graham Beck are the first to kick off their 2020 harvest - starting the decade right! It's been 30 years since Graham Beck's first harvest, and they're celebrating it in style with a Harvest Parade. Where do we sign up? 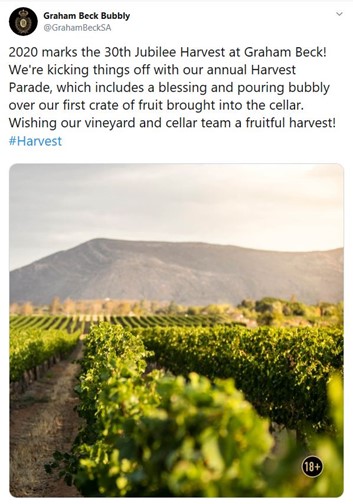 Read all our 2019 harvest reports from the Northern Hemisphere here.