Pinot Noir – with its charming freshness and versatility that can range from fruity to earthy, ethereal to powerful – is still unsurprisingly one of the most sought-after grapes in the world, from entry-level quaffing to top fine wine. Looking beyond classic Burgundy to Pinot producers like Germany and New Zealand, and even other light-skinned varietals like Gamay and Grenache, it’s easy to see why these elegant reds are enchanting the trade.

Christina Schneider, Bibendum ambassador, says, “Although top Bordeaux and Super Tuscans will always have their rightful place in fine dining, the more casual, trendy crowd is turning away from heavily extracted, juicy, jammy, oak-bombs with 14% and more ABV. It's all about ‘Vin de Soif’ now: quaffable, lower alcohol, fresh and crunchy light reds, usually whole bunch fermented and with little to no oak. Wines that you enjoy while dancing, not just with a big steak.”

“It’s about balance,” says Bibendum buyer, Robert Mathias. “In terms of sheer drinking pleasure, I think more consumers are looking to wines that show a real sense of place. When a wine is over-extracted and over-worked, many of these characters are lost. Pinot in particular is very difficult to grow and work with, but the returns can be spectacular. These wines are not over-extracted, and are a real pleasure to drink.

“Pinot Noir is one of those special grapes that transport terroir so well,” he says. “The Cote d'Or is the heartland of Pinot, of course, but there are so many exciting examples from all over the world. We can see some very exciting examples come from cooler climates like Canada, Finger Lakes, Germany, New Zealand and Oregon.

“In addition to Pinot, Beaujolais Crus offer amazing value for money in a large range of styles. There's great difference in terroir and winemaking styles that make this a really exciting region.”

Christina adds, “Gone are the days when the word ‘Beaujolais’ automatically invoked thoughts of drinking cheap, confected plonk on a boozy Thursday in November. Top wines from Morgon, Moulin-a-Vent and Fleurie are as highly regarded as their Pinot Noir cousins from further north by those who have overcome their Beaujolais Nouveau trauma and have given it a second chance. And rightfully so! Producers like Marcel Lapierre and Yohan Lardy gift us with wines that are immensely complex, yet subtle and elegant; highly intellectual, yet with tons of fun. What's not to love?”

Skin on skin – the battle

Pinot Noir is worth a staggering £106m to UK wine sales per year*, but with the rise in popularity of Beaujolais and other light-skinned reds, how does it actually compare?

At our recent Autumn Tasting Notes event, we put Pinot through its paces and pitched it against other light skinned reds. The result? While not all the matches were spot-on comparisons, the non-Pinot wines won seven of the 10 battles on the day – with tasters particularly impressed and surprised by how well the ‘cheaper’, usually non-Pinot wines performed.

Some of the overall stand-out wines of the tasting: 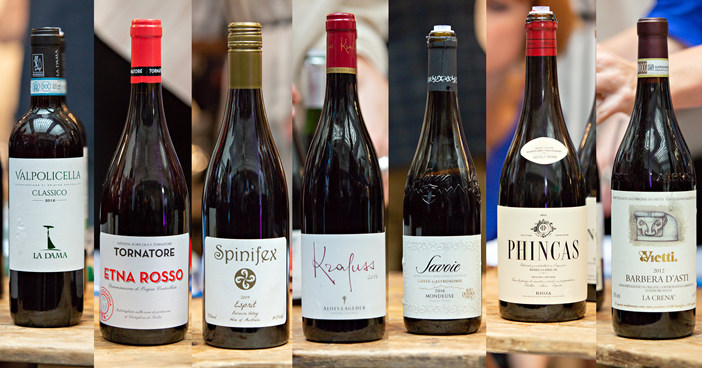 Here’s the complete list of battles, with the winning wine for each pair highlighted in bold:

What do you think? A fan of light-skinned reds? Are you a Pinot punter, or prefer something different? Let us know!

What you need to know about Jura