The recent revival of Irish whiskey has thrust the once-languishing beverage into an era of modernity, with an influx of new producers, innovative blends and unorthodox serves.

So to celebrate this St. Patrick's Day, we'll be looking back in history to one of the truly remarkable stories of Irish whiskey. Owner of one of the most prolific whiskey companies in the world, George Roe is widely credited with helping to usher in the golden era of Irish whiskey in the 19th century. However, the original Roe Whiskey Distillery was established as early as 1707 by George's father Peter, just two years before Arthur Guinness would start up his stout brewery down the road. You may have heard of it.

Two great drinks producers, iconic in their own right and busy with the work of establishing Ireland as a powerhouse of beer and spirits production - they must have been great friends. Well, it seems that wasn't the case... it was a relationship defined more by rivalry than camaraderie, with generations of the Guinness family declaring their stout to be the 'nurse of the people', while decrying spirits like Roe whiskey to be the 'curse of the people'. 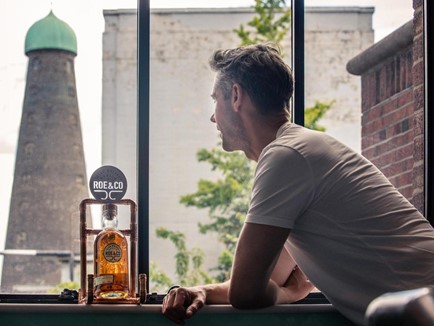 George Roe's original distillery closed its doors in 1926, but was reborn in 2019, with a brand-new distillery nestled in the grounds of the Guinness brewery. Two old rivals, working together at last!

The new site is located right next to a Dublin icon, a windmill built in 1757 to power the original Roe Whiskey Distillery, fittingly called St. Patrick's Tower.

The newly renovated site sits under a glass roof and has a state-of-the-art visitor centre and training bar for bartenders - fitting for a brand that is a nod to the past, while remaining firmly rooted in this modern era of Irish whiskey.

Alan Mulvihill from Roe & Coe explains, "we are determined to pay homage to the great man himself by learning from his successes and being informed by his mistakes. There is so much of the story that we love to tell, both the highs and lows, which echo the history of our great spirit."

The brand's blended Irish whiskey was devised by master blender, Caroline Martin, in consultation with a team of bartenders to create a modern expression of Irish whiskey. Made from stocks of Irish malt and grain whiskies, and aged in Bourbon casks, Roe & Coe has soft notes of spun sugar and warming spice. Plus, you can't miss the distinctive pear character; a stylish nod to the pear tree next to St. Patrick's tower, that dates back to the days of the original Roe Whiskey Distillery and still flowers to this day.

A serve to toast St. Patrick

Check out our breakdown of the category here.

Smoke signals: adding depth and flavour to drinks with smoke

Gab found a love for wine (and winery dogs) during her years on the hospitality scene around Australia. The desire to dip her toes into a bigger wine and hospitality industry drove her to London and today she writes, reads and talks non-stop about wine for Bibendum's website and social channels.