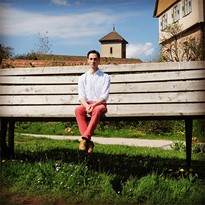 Robert Mathias, Bibendum wine buyer, talks about why Riesling is his favourite varietal.

Riesling is my desert island grape. It has so much potential to express terroir and vintage, and can age effortlessly for decades. Wines can be bone dry to unctuously sweet, but they are generally always light in alcohol and refreshing.

Compared to many international varieties, Riesling is usually an early-ripening grape in the New World, but in the Mosel it is considered a late ripener, especially when compared to the likes of Müller-Thurgau and Frühburgunder. It requires extra hang time and several harvests can take place to create different styles. The grapes themselves, from the best genetic material, are usually small and not too closely compacted. Their susceptibility to rot can cause problems if growth is too vigorous and grapes are too closely bunched. The special thing about Riesling is the vibrant, light-footed character with which it can succinctly represent its origins. Riesling can uniquely express its terroir. It does this best on the steep slopes of the Mosel, Nahe and Rheingau, as well as the warmer and variable soils of the Rheinhessen.

This is the third largest wine area in Germany and is home to some of the most prestigious German wineries. The soils here are quite varied, but the key feature is blue, grey and red slate. The geology is complex and there is still a great deal of variety here, from heavier clay-like sub soils, to solid rock.

The vineyard sites require a huge amount of work, at least seven times more labour hours compared to the flat vineyards of the Medoc. There are over 500 vineyards in the Mosel, and many are returning to their former glory, particularly in villages like Leiwen and Kinheim under the control of great producers. The wines are all about balance and combine lightness of alcohol and vibrant acidity, often balanced by some residual sugar (although ‘dry’ style wines are increasingly popular), and the ability to age for decades.

This is a small river south of the Mosel that flows into the Rhein. It is one of the most interesting and varied geological landscapes to grow Riesling; from green slate to sandstone, Riesling has a huge expressive potential here. The area is divided into the upper and lower Nahe. The upper Nahe is home to famous names such as Donnhoff and Emrich-Schonleber, while the lower Nahe is home to our own Johann Baptist Schäfer. The wines vary hugely between vineyard sites, but the best often combine the lightness and raciness of the Mosel with the substance of the Rheingau.

The Rheingau, a south-facing slab of vineyards on gentle slopes leading down to the Rhine – usefully protected from chilling winds by the Taunus mountains to the immediate north – was for years regarded as Germany’s noblest wine region. This was partly because of its long association with aristocratic estates and the famous abbey Kloster Eberbach. Grand and ancient castles such as Schloss Johannisberg, Schloss Schönborn and Schloss Vollrads have winemaking reputations that stretch back almost as many centuries as their cellars. The best Rheingau wines are almost invariably Rieslings with strongly pronounced mineral qualities and rather more body than most Mosels. The vineyards become increasingly steep towards the west where the Nahe meets the Rhein, which is where you find the famous Berg Schlossberg vineyards; some of Germany’s finest noble sweet wine is made here.

Germany’s largest wine region, Rheinhessen, lies in a valley of gentle rolling hills. While vines are virtually a monoculture in the Rheingau or along the Mosel, they are but one of many crops that share the fertile soils of this region’s vast farmlands. Steep vineyard sites are confined to small areas near Bingen and south of Mainz along the Rhein Terrasse. Varied soils and the favourable climate make it possible to grow many grape varieties, old and new. Throughout (/during) the 1970s in particular the Rheinhessen was home to much of Germany’s bulk wine production, with many hybrid varieties planted. Since the 90s the region has become much more quality driven with the most famous wines coming from the red slopes of Nackenheim. There are also excellent wines made in the warmer, flatter terroir of the Wonnegau, where the soil various from calcareous clay to sandstone. This is a region of renewed life, high-quality wines and innovation.

Take our quiz on all things Riesling here.

A whole month of German Riesling

After graduating with a degree in Music from the University of Cambridge, Robert felt suitably qualified to join the world of wine. Working with Bibendum for over four years now, Robert looks after the buying for France, Germany, Austria, Greece, Eastern Europe, Lebanon, China and Sake. He is currently studying for his Master of Wine qualification.