A whole month of German Riesling

Versatile, food friendly, and addictively refreshing: we are big fans of Riesling at Bibendum. Of course it grows all over the world, but this year we’re joining Wines of Germany in celebrating German Riesling – for the whole of July!

An entire month of Riesling? Sounds great. So what exactly is it? According to Wines of Germany, 31 Days of German Riesling is a nationwide campaign for all independent merchants, restaurants and wine bars, to celebrate Germany’s king of grapes. There’s also a big prize up for grabs!

London restaurants and wine bars signed up to the campaign can feature on a digital map created specially to point consumers in the direction of German Riesling. The map will be featured on Drink Up London, including all venue addresses and descriptions. With a monthly unique visitor count of 16,000 this is a great opportunity to showcase your German wine offer. Running any events for #31daysofRiesling? Advertise them on Drink Up London here.

To help you gear up for this excitement, it just so happens that we have two new German producers who both make exceptional Rieslings:

Schäfer has become well known for distinctive Rieslings and in 2013 they became a member of the Association of German Pradikat Wine Estates (VDP) – the first Nahe winery to become a member in 12 years. This family-run winery now has fourth generation Sebastian Schäfer at the helm. He says, “We create individual wines with their own character, finesse and complexity – wines that reflect their origin. No other grape variety than Riesling shows such clear expression of the character of the soil, the micro climate of the area and the handwriting of the winemaker.”

Christian Peth and his wife Maja Luise craft incredible German wines with an international perspective. Christian doesn’t shy away from powerful and concentrated wines of distinctive character. In fact, Maja and Christian came to appreciate the style during work, studies and apprenticeships across the new and old world. Their unfiltered Riesling is a favourite of Jamie Goode who rated it 92/100: “This is so pretty. Grapefruit and lemons, with some pear and melon, too. Has lovely weight and just a hint of sweetness. Delicate but with plenty of flavour.”

But it’s not all about the newbies, we have plenty of old favourites too:

Since Phylloxera wreaked havoc across the wine producing regions, it is quite unusual to see ungrafted vines in Europe. Ungrafted vines of around 100 years old are rarer still. Working with veritable living antiques like this would be daunting for most winemakers – but not for Markus Molitor. Now one of the largest family-owned vineyards in the region, every wine is still produced organically, without fining or industrial yeasts. Their Rieslings are a taste of true German terroir.

Prinz Von Hessen is located on a wide sweep of south-facing vineyards on the Rhine. It has holdings in some of the best vineyards in the Rheingau and 20 of the 30ha of vines are planted on first growth sites. It is the very heart of fine German wine production, with the ancient Schloss Johannisberg (where Riesling was first planted in 1720) located just behind one of PVH’s vineyards. Their Dachsfilet Riesling is mineral and spicy while retaining the characteristic lime profile. The name ‘Dachsfilet’ is a portmanteau of ‘Dachsberg’, the steepest and windiest site at the winery, while ‘filet’ alludes to the section of the Rheingau that Prinz Von Hessen occupies. 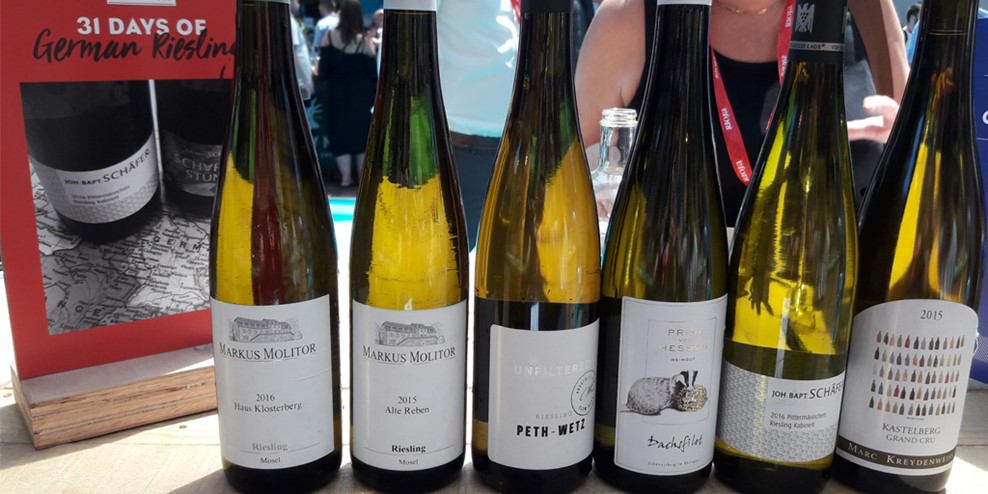 The Battle of the Rieslings: Imbibe Live

This year at Imbibe Live we held a pop up Riesling stand that turned into a fierce battle of New vs Old World producers, voted for by all our stand visitors. After two afternoons of serious tasting, the German Rieslings, led by German-born Bibendum ambassador Christina Schneider, just sneaked ahead of the New World in the eye of our visitors.

To get involved with the campaign or find out more, visit the Wines of Germany website.