We asked all budding sake ‘samurais’ to get creative for our Sake Cocktail Competition in September. The brief was simple: create two cocktails using a sake base, one Martini and one original. The results were amazing – and delicious.

Contestants were given 15 minutes to create both cocktails, racing against the clock to impress the judges for a chance to win a trip to Japan in 2017. The sake was not allowed to be distilled or infused by entrants, and drinks could have no more than six ingredients.

Our panel comprised some of the sake world’s greats. First up, Christian Pulido, director of operations and beverage at Kiru restaurant. Chris is an internationally-recognized ombudsman of sake, with a bent toward its creative application in nouveau-Kaiseki, Japanese and Western restaurant settings alike.

Next we had Patrick Hobbs, chief booze engineer for event professionals Camm & Hopper and self-professed Willy Wonker of all things alcoholic. Last but not least was Barry McCaughley, owner of Wineaux Ltd. Barry was the 2013 Sake Sommelier of the Year runner up and is an established sake educator.

After much deliberation the winning sake cocktail collection was that of Christina Schneider from Som Saa. Congratulations!

Here are some of our favourites, including Christina’s winning original Zucchini cocktail:

Method: Build ingredients in a Boston glass, stir, and strain into a chilled martini glass.

This creative cocktail was devised by Christina Schneider of popular Thai restaurant Som Saa. She paired aged sake with fortified wine and a dash of bitters…

Method: Build ingredients in a Boston glass, shake, and double strain into a martini or rocks glass.

The Original: For God Sake!

This cheeky number was brought to the table by Marco Salazar of Eclipse Bars. A fruity cocktail that matches plum sake with its original fruit form.

Method: Muddle the plum and other ingredients together, shake and strain into a rocks glass. 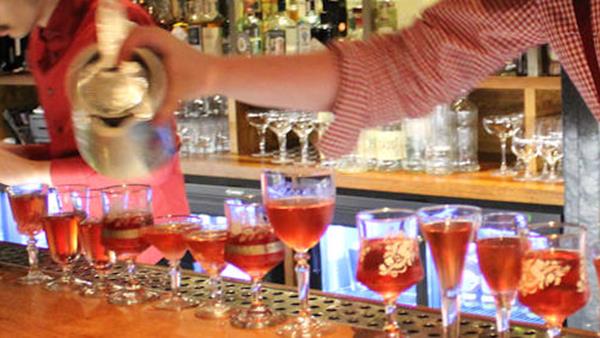