2017 saw a cooler growing season for most compared to recent years, leading to an extended growing season, where grapes could develop full flavour ripeness while retaining punchy vibrancy.

Buyer Matt Smith is optimistic about Australia’s 2017s: “Whilst Australia covers a huge range of growing conditions the 2017 vintage can broadly be summarised as a late harvest following a long cooler ripening period. This has led to wines of great finesse and quality. Whites are bright and lively with great elegance whilst reds are pure, fresh fruited and show huge potential.”

Here is a round-up of the harvest by some of our producers:

2017 was cooler than last year, but probably not that unusual if compared over a longer average.

Vine canopy health was exceptionally good right up to vintage due to these cooler summer temperatures, as well as a higher residual moisture in the soil. This meant that full ripeness could be achieved even where fruit took considerably longer to ripen – leading to great flavour concentration. Harvest was about three weeks later than last year.

The resulting wines are full of flavour and energy, with Chardonnay looking particularly good. Chief Winemaker Clive Otto said “The Chardonnays have wonderfully bright, natural acidity this year with lower sugar levels and lower pHs, which can only mean long-lasting wines, similar to what they get in Burgundy.” Red fruit was also in no rush, with relaxed, even ripening. As a result, the Cabernet has great freshness and energy with deep colour and an attractive concentration of tannins.

The growing season began with late budburst after a relatively cold, wet winter. But a mild spring ensured good flowering and fruit set - in fact some yields needed to be addressed with crop thinning. Summer was fine and mild, and ended up being one of the coolest growing seasons in recent years.

Harvest commenced later than usual, starting with the whites at the end of February. Reds were harvested from late April, which was luckily very dry after a wet March. This extended ripening period allowed the reds to attain full physiological maturity and tannin ripeness. The last harvest was on 4 May, almost a month later than usual.

Despite some challenges early on, 2017 has proved to be a successful year, with bright, complex, crunchy Chardonnays and elegant, yet surprisingly inky, dense Cabernets given the cooler season.

2017 was cool and initially relatively damp, with good moisture up until veraison. Rainfall was up on average and harvest started in March; a little late compared to recent years, but historically more of the norm.

Cooler weather led to bigger canopies, which has meant great, even ripeness. The whites have a lovely verve to them and the reds are full of red and blue fruit; very pretty in contrast to the 2016s, which had a much more muscular structure. Overall the 2017s are svelte, elegant and attractive.

Winter experienced high levels of rainfall and these continued into spring, which, in combination with high winds, resulted in relatively poor flowering and reduced yields across most varieties. Summer, however was cool and dry, and provided excellent growing conditions, which continued into the harvest months of March and April, with dry weather and slightly above average temperatures.

Pinot Noir and Chardonnay fruit for still wines matured more rapidly than typical due to the 30% reduced yield. The fruit therefore reached flavour maturity at lower sugar levels than typical, and allowed for a slightly earlier harvest for table wines.

The stand out for 2017 appears to be Pinot Noir, great intensity of red berry fruit characteristics, driving acidity and a deeper colour profile than in previous vintages. The Chardonnays have vibrant acidity, with prominent citrus fruit flavours combined with a tight structure, which should hold them in good stead over the following 12 months in barrel.

For all this year's Southern Hemisphere harvest reports, see our round up. 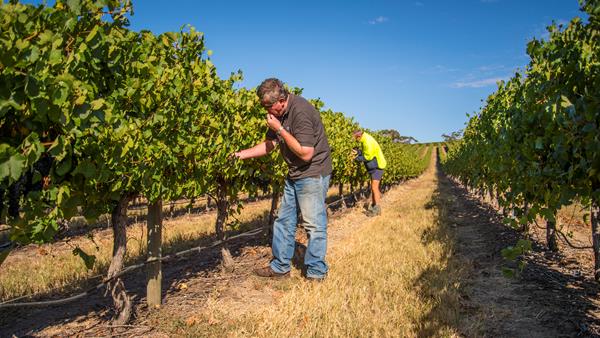